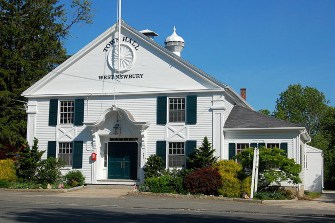 West Newbury’s history began in 1635 when 23 men and their families, all from England, sailed through Plum Island Sound and up the Parker River, landing in Newbury. As more settlers arrived, land in Newbury became scarce so some moved west to the “upper woods” beyond the Artichoke River.

After years of petitioning the General Court of Massachusetts, West Newbury became a separate town.

Working farms and a dairy plus extensive conservation land characterize West Newbury bordered on the south by the bustling Newburyport and on the north by the Merrimack River. Icy and dramatic in winter, the waterway is inviting to boaters and fishermen in spring through fall. Plum Island beaches are minutes away. New Hampshire and Maine are close by, too. Trains, buses, and Interstates 95 and 495 access Boston, roughly 40 miles to the south.

Things to do in West Newbury:

Although West Newbury has but a few places to shop, Newburyport, which is a fifteen-minute drive, has a myriad of options for whatever you may be seeking.

West Newbury is part of the Pentucket Regional School District.