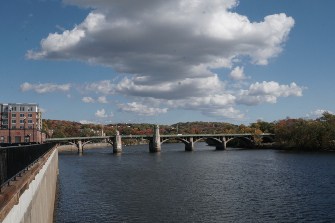 Haverhill, MA has been nicknamed “Queen Slipper City” and is often called “Shoe City.” Shoe-making was its leading industry for 180 years. The city evolved as a major industrial center with saw and grist mills, tanneries, boatyards, and shoe making starting in the late 17th century. You will find local merchants and restaurants paying homage to the shoe industry with footwear décor and whimsical displays. The Soles of Haverhill Shoe Sculpture Tour started in 2009, with 14 shoe sculptures created by local artists and placed around the community. Seven whimsical shoe sculpture benches were installed along sidewalks around the city in 2014.

The city was incorporated in 1870. Bradford, just south of Haverhill, was annexed on January 1st, 1897. The population was 67,787 in 2020. It has nearly 36 square miles of land ranging from agricultural areas to urban areas. There are five interchanges for Interstate 495 running along the city. MBTA Commuter Rail provides service to North Station Boston from Haverhill Station and Bradford Station.

There are excellent recreational opportunities along the Merrimack River winding through the city (boating, birdwatching, and sailing programs), public and private golf courses to explore, and a downhill skiing area in Bradford (15 trails with eight black diamonds and a terrain park) for local winter fun.

Things To Do in Haverhill:

Downtown Haverhill has become a destination for locals and tourists looking for a tasty meal. It is well known for its delicious restaurants and boutique shops, thanks to the revitalization initiative that began in the early 2000s. The city council recently approved the $160 million Merrimack Street Redevelopment Project in 2022. The project calls out the importance of Downtown and the riverfront, including more delicious restaurants!